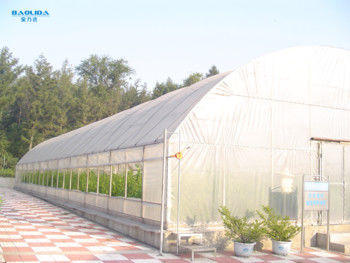 Greenhouse, also known as a greenhouse, refers to a room with cold protection, heating and light transmission facilities for the cultivation of warm plants in winter.In the season which is not suitable for plant growth, it can provide the growth period and increase the yield. It is mostly used for the cultivation or seedling cultivation of vegetables, flowers, trees and other plants in the low temperature season.A greenhouse is a building that controls or partially controls the environment in which plants grow.It is mainly used for non-seasonal or non-regional plant cultivation, scientific research, plus generation breeding and ornamental plant cultivation.

1. Overall dimensions of the plastic greenhouse

Generally, the main structure of plastic greenhouse is made of hot-dip galvanized steel pipe, which is manufactured in factory and installed on site.Due to the light weight of the plastic greenhouse itself, the resistance to wind and snow load is weak, so, the stability of the structure as a whole should be fully considered, generally in the second span or the second bay to set up a vertical diagonal support, in the greenhouse's external protection structure and roof must also be considered to set up the necessary space support.It is better to have the inclined support (the inclined tie rod) anchoring in the foundation to form the spatial force system.

The main structure of the plastic greenhouse should be able to resist wind force of at least 8, and the wind force of 10 is generally required.

The snow load carrying capacity of the main structure should be determined according to the actual snowfall conditions in the construction area and the winter use of the greenhouse.For use in the north, the designed snow load should not be less than 0.35kn/m2.