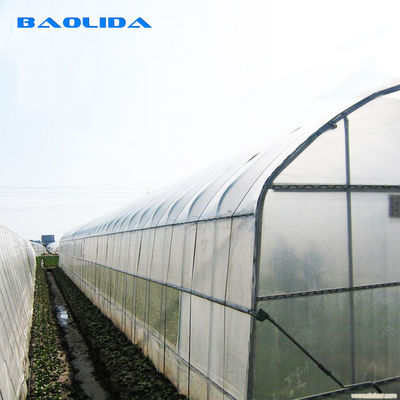 This greenhouse is only installed, it is made of electroplated pipes. There is no vertical column in the greenhouse, so the lighting effect is enhanced, which is conducive to mechanical operation, thus improving the ability of land use.

The design data for such greenhouse gases are relatively small. Due to its simple structure, the base is usually inserted into the soil or simple concrete base, and the skeleton is usually an electroplated circular tube.
There are two vents on both sides of the greenhouse, and there are insect nets in the room to prevent pollution and loss caused by virus carrying insects. The front door has a sliding door.

A simple and practical protection ground cultivation facility is widely used in countries around the world due to its easy construction, convenient use and low investment. The use of bamboo wood, steel and other materials, and cover plastic film, arched shed, for cultivation of vegetables, can be early or delayed supply, increase production per unit area, is conducive to the prevention of natural disasters, especially in the northern region in early spring and late autumn off season Supply fresh vegetables.

(1) Door: there are two manual sliding doors in the middle of both sides of the greenhouse. The door size is 1500 mm × 2000 mm (width × height). The door is a 25 × 1.5 mm pressurized square heat pipe, ramp, card slot and bag. The corner on the door is being assembled.
(2) Window opening system:
Manual film rolling window ventilation device is adopted, and manual film roll is installed at both ends of the greenhouse. The oscillating rod is made of heated galvanized steel pipe, and each reinforcement is 25 × 1.5. The windows are locked with a mesh net 40.
(3) Overweight system:
The whole shed has a 0.10 mm high quality Greek film with a 2-year warranty and 5-year service life. It's used to make cards and rubber rings Greek film adopts three-layer joint decomposition technology, its function is to eliminate fog, prevent water leakage, prevent aging, etc. compared with family agricultural film, its light transmission has obvious advantages.

In order to protect vegetables and crops, we decided to use insect nets on the sides or top of the roof. Insect net is a kind of net fabric made by adding anti-aging, anti-ultraviolet and other chemical additives. It has high tensile strength, heat resistance, water resistance, corrosion resistance and aging resistance. It is non-toxic, tasteless, and easy to handle waste.