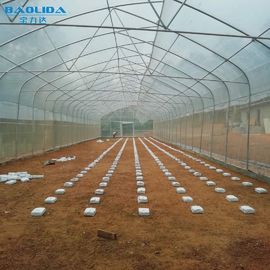 The plastic tunnel greenhouse is applied to the cultivation of vegetables and other economic crops, effectively prevents natural disasters and improves the production and income of the unit area. With easy assembly benefits, lower investment and high production.
And it's made of hot-zinc tubes with a monolayer film for the covering material. The frame structure is simple, economical and easy to install. Depending on the climatic conditions, it is usually equipped with manual winding units on the side wall to obtain a good ventilation and cooling system.
It consists of one or more modules with a series of arcs made with zinc cylindrical tubes, which do not require concrete bases, allowing for transfer and easy installation. Its shape allows to contain more air inside and provides resistance to rain and insects.

A greenhouse is a building in which lighting coating materials are used in whole or in part, and can be used for planting plants in winter or other seasons that are not suitable for uncovered plants.

Film in PE, simple or double layer, the thickness varies according to the design. The PE film has good flow reduction properties, resistance to atmospheric agents, light transmission and temperature conservation. The company is mainly engaged in various agricultural films, not only can it be used in greenhouses, but also widely used. Small and medium-sized greenhouses and energy-saving greenhouses are also more suitable at the beginning of spring.

Drip irrigation system is a best way to keep the plants hydrated and save the water ,it be used widely around the word ,especially in Africa or other Arid and water-scarce areas .

.Fruits such as grape,strawberry,watermelon,orange etc,.